The year 1968 has been memorialized recently with a slough of exhibits, events, new books, and other testimonials marking the 50th anniversaries of that year’s revolutionary upheavals, movements, and protests — Union Theological Seminary of course has a long history of resistance activism, and librarians at the Burke thought that Union should have its own display of archival materials from that historic year. 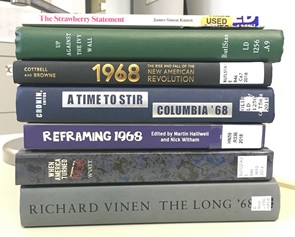 Recent memoirs and history monographs on the year 1968. Photograph by Carolyn Bratnober, The Burke Library at Union Theological Seminary (2018)

Little did I know, at the start of creating this exhibit, that Union underwent its own revolutionary changes that year, and indeed Union played a pivotal role in Columbia’s infamous 1968 student protests. My research for the 1968 exhibit unearthed some of this history, which I am excited to share via the Burke Blog as part of this series.

I knew about Columbia’s student protests from reading James Kunen’s memoir The Strawberry Statement many years ago. In April of 1968, students at Columbia occupied university buildings in protest of Columbia’s involvement in recruitment and weapons research for the War in Vietnam, and in the gentrification of Harlem in general. Columbia’s administration sought to quell the protests, which lasted several days and drew significant media attention, by calling law enforcement — whereupon, predictably, the police used brutal tactics against the students, throughout several days of violence. When I consulted the archives of Union Theological Seminary’s president’s office files, community photographs, and student publications from that time period, to see what I could find for our 1968 exhibit, I was heartened to see news coverage showing Union students involved in resistance during the Columbia protests, and even doing nonviolent interventions with the police. What surprised me was the fact that Union students and administrators came together on this issue, agreeing to cease all UTS classes for the remainder of the school year; there is a letter from President John C. Bennett included in the exhibit, officially halting classes and forming a series of alternative revolutionary teach-ins called the Free University in which students could assemble and strategize to build revolutionary momentum around the protests. I and my co-curators thought these events should definitely be the focal point of our exhibit on Union in ‘68. We conducted a great deal of research to get a closer look at these resistance efforts, which in fact catalyzed a series of liberatory changes at Union (which will be described in greater detail in subsequent blog posts by my collaborators) and we decided to call this exhibit “Spirit of ‘68: Revolution and Resistance at Union Theological Seminary.” 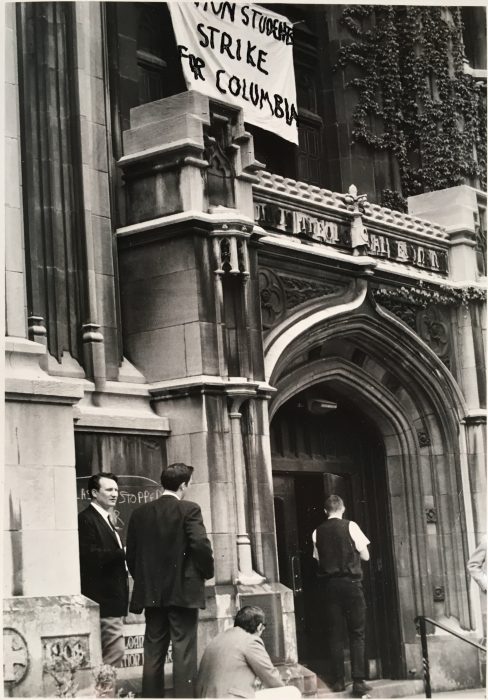 The whole exhibit was a team effort. Staff from the UTS Development Office, Emily Odom and Kevin Bentley, who possess extensive knowledge of Union alumni, helped with curation. It was their idea to host an event during the 50th Reunion of the UTS Class of 1968 in early October, when many alumni would be coming to town, which was truly a stroke of genius. We organized a nice reception to mark the opening of the exhibit on October 4th, and extended invitations throughout the Union community. Background research was a major part of putting the exhibit together, and the files from this time period in the UTS archives are extensive; thankfully, a Union student, Jake Hearen, offered to pitch in on the reading and research, and he became our indispensable Research Assistant for the project.

“Spirit of ’68” exhibit display on level L1 of the Burke Library. Photo by Carolyn Bratnober, The Burke Library at Union Theological Seminary (2018).

Prior to starting the research for this exhibit, I had thought putting the physical display together was going to be the most challenging part; however, as it happened, members of the Conservation & Preservation Department for the Columbia University Libraries were happy to help construct photograph frames, book cradles, and display mounts for each of the items we selected. (After all, these materials are both unique and extremely fragile, and they deserve utmost care in their handling and display.) The entire team worked hard to create this exhibit, it was a massive undertaking and could definitely not have been done by one person alone.

For the opening reception, we also had the idea to involve the guests in collecting memories and metadata about the items on display– we put up a projector screen and projected a slideshow of images of documents and photographs from the time period, and invited guests to note in a nearby notebook if they recognized individuals by name, and dates and place info for events featured in the slideshow. We also included a table of books about 1968 for guests to browse (some of which are pictured here). It turned out to be quite an event, attended by alumni, faculty, librarians, and students, with sparkling conversation over desserts and champagne, and everyone seemed to enjoy the evening very much. Eventually I hope that research around these events will lead to broader understanding of this time period– I hope to include some of this crowd-sourced metadata in the archival Finding Aid, and to have many of the exhibit’s materials digitized for an online exhibit that will offer researchers the chance to see these items remotely in the years to come, and to continue exploring this revolutionary era in our community’s history. 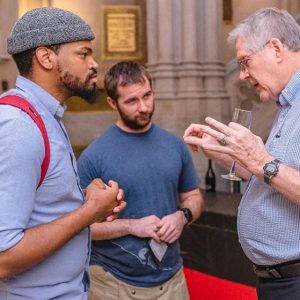